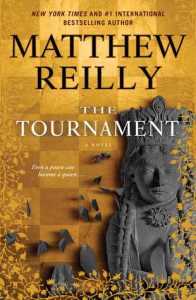 Summary: The year is 1546, and Suleiman the Magnificent, the feared Sultan of the Ottoman Empire, issues an invitation to every king in Europe: You are invited to send your finest player to compete in a chess tournament to determine the champion of the known world.

Thousands converge on Constantinople, including the English courts champion and his guide, the esteemed scholar Roger Ascham. Seeing a chance to enlighten the mind of a student, Ascham brings along Elizabeth Tudor, a brilliant young woman not yet consumed by royal duties in Henry VIII’s court.

Yet on the opening night of the tournament, a powerful guest of the Sultan is murdered. Soon, barbaric deaths, diplomatic corruption, and unimaginable depravity sexual and otherwise unfold before Elizabeth’s and Ascham’s eyes. The pair soon realizes that the real chess game is being played within the court itself…and its most treacherous element is that a stranger in a strange land is only as safe as her host is gracious.

Review: I have been struggling with writing reviews lately and it’s making it hard for me to put into words what I thought about this book. So I am just going to let you know now, this is going to be a very short and probably bad review. I also want you to know that I enjoyed this book.

Over the last year I’ve been hearing a lot about Matthew Reilly. Everyone says his books are amazing and everyone needs to read them. So when I won an ARC of The Tournament from Goodreads, I was beyond excited. As soon as I got the chance to pick this one up and read it, I did. It’s a good book, but I had such high expectations going into it that I was slightly disappointed.

I think my biggest problem with this book is that it just wasn’t long enough. I felt like we didn’t go deep enough into the story. A lot of times I even forgot the story takes place in 1546. Although, that might be my fault. I used to read nothing but historical fiction and most of those books were big and had a lot of description that made it easier to imagine that time in history. There was also a character in this book that I just kept asking myself why they were even in the book. What was the point of that character? Once again, that might just be me. You might not feel the same way about that character.

However, I did like the relationship between Elizabeth and Roger Ascham. Those two were by far the best part of the book. I loved Ascham. I also loved how addicting this book is. I was in a bit of a reading slump when I read it, but I still  managed to read it in one sitting. I just didn’t want to put it down.

Overall I enjoyed the book and will read more by this author. If you want a short, quick, and somewhat addicting historical fiction to read, pick this one up. It shouldn’t take you too long to read. 🙂

3 thoughts on “Review: The Tournament by Matthew Reilly”