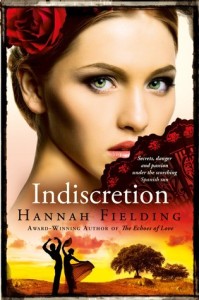 Details: Paperback, 489 pages
Publication: April 9th 2015 by London Wall Publishing
Source: I got it for review from the author.
Buy it: Book Depository
My Rating: 3 Stars

Summary: A young woman’s journey of discovery takes her to a world of forbidden passion, savage beauty, and revenge.

Spring, 1950. Alexandra de Falla, a half-English, half-Spanish young writer abandons her privileged but suffocating life in London and travels to Spain to be reunited with her long-estranged family.

Instead of providing the sense of belonging she yearns for, the de Fallas are driven by seething emotions, and in the grip of the wild customs and traditions of Andalucia, all of which are alien to Alexandra.

Among the strange characters and sultry heat of this country, she meets the man who awakens emotions she hardly knew existed. But their path is strewn with obstacles: dangerous rivals, unpredictable events, and inevitable indiscretions. What does Alexandra’s destiny hold for her in this flamboyant land of drama and all-consuming passions, where blood is ritually poured on to the sands of sun-drenched bullfighting arenas, mysterious gypsies are embroiled in magic and revenge, and beautiful dark-eyed dancers hide their secrets behind elegant lacy fans?

“Indiscretion”is a story of love and identity, and the clash of idealsin the pursuit of happiness. But can love survive in a world where scandal and danger are never far away?

Review: I have been sitting here for the longest time trying to figure out what to say in this review. I have no idea how I’m supposed to review this book. I liked it but it took me so long to read. It took me over a week to read and I have no idea why that is. It was good so I should have read it in a couple of days.

Indiscretion is well written and has interesting but sometimes frustrating characters. At times I would get a little annoyed with Alexandra and Salvador, but that didn’t stop me from enjoying the book. It just made me want to grab them and shake them….or maybe smack them. 🙂 Also, I have no idea how Alexandra puts up with as much as she does and for as long as she does. I would have went back home not long after meeting everyone. I guess it’s a good thing she didn’t do that. Probably wouldn’t have made a very good book if she went back to England after only a few days.

Even though it took me forever to read and at times I got a little frustrated with the characters, I still wanted to keep reading. I would love to read more by Hannah Fielding in the future. If you’re into romance, you should check this one out.