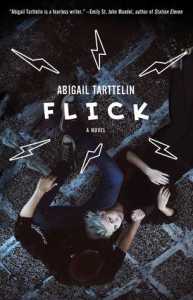 Summary: From the critically acclaimed, award-winning author of Golden Boy comes Abigail Tarttelin’s debut novel, written when she was just nineteen and never before published in America, a modern-day Romeo and Juliet about sex, love, and growing up.

My name is Flick and these are my images of my disconnected life, my forgettable weeks and unforgettable weekends. I am one of the disaffected youth.

Marooned by a lack of education (and lack of anything better to do), Will Flicker, a.k.a. “Flick,” spends most days pondering the artistry behind being a stoner, whether Pepsi is better than Coke, and how best to get clear of his tiny, one-horse suburb. But Flick senses there’s something else out there waiting for him, and the sign comes in the form of the new girl in town—a confident, unconventionally beautiful girl named Rainbow. As their relationship develops, Flick finds himself torn between the twisted loyalty he feels to his old life and the pull of freedom that Rainbow represents.

The story unfolds in a small factory town in northern England, where bleak and sometimes treacherous circumstances make the taste of a love affair even sweeter. Told with humor and raw honesty, in a voice “both authentic and compelling” (GQ, UK), Flick captures an unforgettable moment in the life of a young man on the verge.

Review: When I found out that I won an ARC of this book from Goodreads I was super excited. When it showed up I had to start reading it right away. I couldn’t wait. Unfortunately, I didn’t love it. I guess I just wasn’t in the mood for it because it took me two weeks to read it. Flick seems like it would be a fast read. It’s not too long and it’s good. I just couldn’t stick with it for some reason. It took me so long to finish.

Normally I love characters like Flick and love books like this one, but Flick and his friends just said a lot of stuff that annoyed me. I know the author was probably trying to make them sound like teenagers, and I suppose some teens do talk like that, but it just pissed me off at times. Again, that might have had something to do with the mood I was in. However, I really did like Rainbow. She was great.

Overall I enjoyed the book and would like to read more from this author.