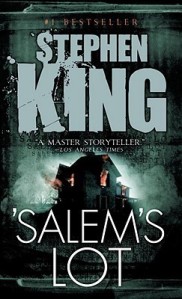 Summary: ‘Salem’s Lot is a small New England town with white clapboard houses, tree-lined streets, and solid church steeples. That summer in ‘Salem’s Lot was a summer of home-coming and return; spring burned out and the land lying dry, crackling underfoot. Late that summer, Ben Mears returned to ‘Salem’s Lot hoping to cast out his own devils… and found instead a new unspeakable horror.

A stranger had also come to the Lot, a stranger with a secret as old as evil, a secret that would wreak irreparable harm on those he touched and in turn on those they loved.

All would be changed forever—Susan, whose love for Ben could not protect her; Father Callahan, the bad priest who put his eroded faith to one last test; and Mark, a young boy who sees his fantasy world become reality and ironically proves the best equipped to handle the relentless nightmare of ‘Salem’s Lot.

Review: ‘Salem’s Lot is one of those books I’ve been wanting to read for years. For some strange reason I just never bought it. So when I found it at the library I was beyond excited. Now that I’ve read it, I wish I had bought it.

I love Stephen King. Even though I haven’t read many of his books, he is still one of my favorite authors. So I had extremely high expectations going into this one. I was only a tiny bit disappointed.

I absolutely loved every single thing about this book. The plot was amazing, the characters were great, and of course it was well written. As soon as I finished reading the last page, I started telling everyone I know to read it if they haven’t already. It is incredible.

So you are probably wondering why I said I was a little bit disappointed and why I only gave it four stars instead of five. Well, I didn’t find ‘Salem’s Lot creepy. Everyone that I’ve talked to that has read it said it was really scary. It takes a lot to freak me out, so I shouldn’t have been disappointed that I didn’t get even a bit creeped out, but I was. I wanted to be scared.

Overall, it was an amazing read. I would love to re-read it someday. Maybe a second reading will put it up to five stars since I will know going into it that it isn’t scary.

If you haven’t read this one, you need to. It is such an amazing story. I flew through it in two days. It was so good. Please pick it up.

Note: This is an older review. So I don’t feel like I can get more into what I liked and disliked about it. Maybe someday I will re-read ‘Salem’s Lot and do another review. Better reviews (hopefully) in the future.