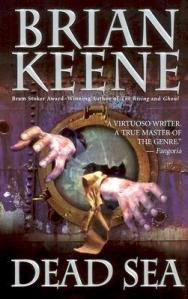 Summary: The streets of the city are no longer safe. They are filled with zombies — the living dead, rotting predators driven only by a need to kill … and eat. Some of the living have struggled to survive, but with each passing day, their odds grow worse. Others have fled, frantically searching for a place to escape, even briefly, the slaughter around them.

For Lamar Reed and a handful of others, that safe haven is an old Coast Guard ship out at sea, with plenty of water separating them from the grasping hands and tearing teeth of the dead. These desperate survivors are completely isolated, cut off from the dangers of the mainland. But their haven will soon become a deathtrap, and they’ll learn that isolation can also mean no escape!

Review: I have had this book sitting on a shelf for at least a year. I wanted to read it, but for some reason I just kept putting it off. I am so glad I finally picked it up and read it.

Keene creates a world full of zombies that is believable. I was pulled right in and felt like it was really happening. The main character, Lamar, is so real. Usually authors make characters too brave and they just don’t seem realistic. Lamar was human and he acted like it, which made him seem even more strong and brave. I loved his flaws.

I also loved the plot and the writing. However, it did have some parts that kind of dragged for me. I was forcing myself through these pages. It paid off though, because in the end, I thought Dead Sea was an amazing book and it left me wanting more.