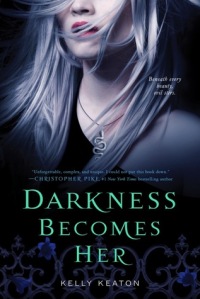 Summary: Ari can’t help feeling lost and alone. With teal eyes and freakish silver hair that can’t be changed or destroyed, Ari has always stood out. And after growing up in foster care, she longs for some understanding of where she came from and who she is.

Her search for answers uncovers a message from her long dead mother: Run. Ari can sense that someone, or something, is getting closer than they should. But it’s impossible to protect herself when she doesn’t know what she’s running from or why she is being pursued.

She knows only one thing: she must return to her birthplace of New 2, the lush rebuilt city of New Orleans. Upon arriving, she discovers that New 2 is very…different. Here, Ari is seemingly normal. But every creature she encounters, no matter how deadly or horrifying, is afraid of her.

Ari won’t stop until she knows why. But some truths are too haunting, too terrifying, to ever be revealed.

Review: I picked this book up after reading The selection by Kiera Cass, which was a very fluffy book. Darkness Becomes Her is dark and I loved that. I was in the mood for something that was darker.

Keaton wrote such an amazing story with great characters. I did not want to pit it down. I was so pulled in that I just flew right through it and was sad that it ended.

I didn’t mind it, but if you have a problem with books that have swearing in them, than I wouldn’t suggest you read this book because I’ve never read a young adult book with so much swearing in it before.

This is a series I will be continuing. I can’t wait to get my hands on book two, A Beautiful Evil.