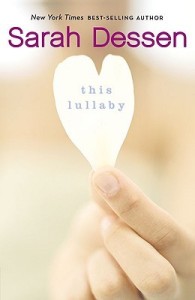 This Lullaby by Sarah Dessen

Summary: When it comes to relationships, Remy doesn’t mess around. After all, she’s learned all there is to know from her mother, who’s currently working on husband number five. But there’s something about Dexter that seems to defy all of Remy’s rules. He certainly doesn’t seem like Mr. Right. For some reason, however, Remy just can’t seem to shake him. Could it be that Remy’s starting to understand what those love songs are all about?

My Review: Believe it or not, this was the first Sarah Dessen book I’ve ever read. I actually won this book awhile ago with a couple of others. I just kept putting it off since I didn’t know what to expect going into it but I can honestly say that I enjoyed it so much that now I want to read all of Sarah Dessens books.

This Lullaby was a fantastic read. It was also a fast read. I flew right through it needing to know how it would end. I just couldn’t put it down. I kept telling myself that I would take a break after one more chapter but that never happened. I read the whole thing in one sitting.

The main character, Remy, was hard to like at times but for me that just made her seem more real. She actually had flaws which is pretty unique. Usually if a main character has flaws it’s something that can be looked at as kind of cute and not much of an actual flaw. So as much as I wanted to smack Remy sometimes, it was also refreshing to have a character that seemed so real.

Dexter was just plain awesome. I wanted to be friends with him from the start. He is so funny and just impossible to not like. He had me laughing so hard at times. Even weeks after reading This Lullaby I wanted Dexter to be real and not a fictional character so I could hang out with him

Overall, this was a great book, with an interesting plot and it was well written. I am now a Sarah Dessen fan and I will definitely be picking up more of her books in the future.