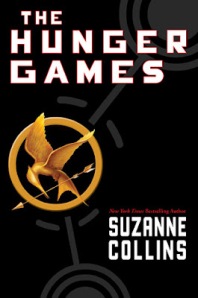 Summary: In the ruins of a place once known as North America lies the nation of Panem, a shining Capitol surrounded by twelve outlying districts. The Capitol is harsh and cruel and keeps the districts in line by forcing them all to send one boy and one girl between the ages of twelve and eighteen to participate in the annual Hunger Games, a fight to the death on live TV.

Sixteen-year-old Katniss Everdeen, who lives alone with her mother and younger sister, regards it as a death sentence when she steps forward to take her sister’s place in the Games. But Katniss has been close to dead before—and survival, for her, is second nature. Without really meaning to, she becomes a contender. But if she is to win, she will have to start making choices that will weigh survival against humanity and life against love.

My Review: Where do I begin? I’ve read only three books this year (2012) so far that have pulled me in completely and this is one of them. While reading The Hunger Games I forgot all about sleep and eating. I couldn’t put it down. I read right through it, dying to know what was going to happen next.

There were so many times I picked The Hunger Games up in the store just to put it back because of all the hype. It’s the same reason it sat on my self for months before I finally decided to give it a try.

The hype for other books ruined them for me so I was more than a little worried going into this one. I am so glad I didn’t pass it up. I think the last time I read a book with a plot this good, characters this interesting and with writing this incredible was when I read Harry Potter for the first time. I have never compared anything to Harry Potter before because I had never read anything as perfect as that series until now.

If the other two books are as amazing as the first, I know I will be re-reading all three over and over again for many years.